The latest news specifically for American Baptist Churches of Ohio.

ABC/Ohio Celebrates a New Direction in Ministry and Board Governance

By an overwhelming vote, delegates at the ABC/Ohio Annual Gathering affirmed the Board of Regional Ministries proposal to establish new governance – board structure beginning January 1, 2011.  The vote was 131 yes and 5 no, which means that it passed by 97%.

The vote came following nearly a year of prayer, discernment, and planning by a Transformation Team appointed by the Board in November 2009.  Along with Mark L. Vincent, lead partner from Design Group, the staff and board met in January and February to envision what God might lead ABC/Ohio to do with its historical representative board structure.

Read more: ABC/Ohio Celebrates a New Direction in Ministry and Board Governance

It was a very snowy Friday evening as the American Baptist Youth Conference in Columbus kicked off on February 5, 2010.  Twelve to eighteen inches of snow fell across the region but it did not freeze the spirit!  Greg Stier led a rousing evening featuring great music by Starfield, Propaganda plus dramatic presentations revolving around Isaiah 6.

American Baptist Churches of Ohio has a partnership with Judson Press, National Ministries’ publishing ministry for the denomination. “Judson Press Regional Rewards” is an affiliate bookstore program that provides an easy way to generate funds for our region's ministries.  Read more to find out how to participate in the program . . .

The ABC/Ohio Mission Encounters took place for two special days this summer.  The first Mission Encounter was held on July 11, 2009 at the Tabernacle Baptist Church in Chillicothe.  Rev. Walt White, an American Baptist International Ministries Global Consultant was the guest speaker.  He gave details of his experiences traveling around the world and consulting with church leaders as they reach-out to those in their communities who do not know Jesus. He is an excellent resource for American Baptist congregations who wish to understand Islam and some of the forces shaping world events today.  Recently Walt has been in Australia, Turkey, Singapore and other countries sharing with church leaders.

The 183rd Annual Gathering featured a variety of events recognizing those who have contributed of their time and talent to ABC-Ohio. 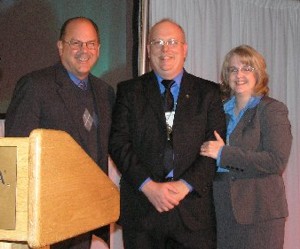 On October 16, 2008, Dr. Larry Swain, Executive Minister, presented the past president's pin to Rev. Timothy Mohon, pastor of the Grand Prairie Baptist Church, who will continue to serve as ABC/Ohio President through the end of December 2008.  Pictured are Dr. Swain, Rev. Mohon and Pamela Mohon, Tim's spouse.