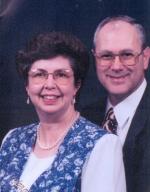 First Baptist Church of Girard, Rev. Sarah Jay - Pastor, opted to create a rather unique “Manger Scene” for this past Advent Season.  The sign reflects ‘There Shall be Peace on Earth, and the Lion shall lie down with the Lamb.’  What a beautiful picture, as reflected in the Book of Isaiah, Chapter 11. 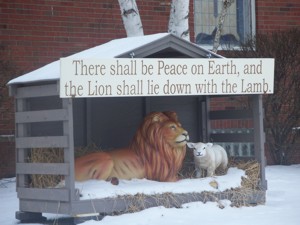 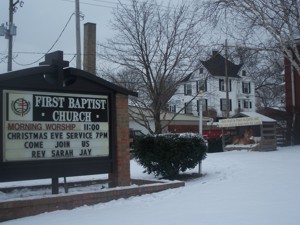 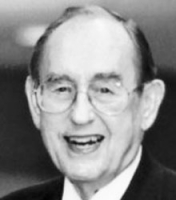 Milton Walker Bennett, Jr. left this world for his eternal home on December 13, 2010. Milton is known for his service to his Lord and his community. He was a member of First Baptist Church of Greater Toledo for 67 years and served as Past President of the Executive Council in addition to spearheading numerous building programs and boards. He was a past President of the Ohio Baptist Convention, past Treasurer of the ABC/USA and a past Trustee of Judson College, Elgin, IL. Milton leaves a legacy of love and devotion to his Lord, his family and his friends. He will always be remembered for his ideals and his unwavering standards. His lessons in life will live on in the hearts and through the actions of his family.

It was 1967, two years before Neil Armstrong stepped on the Moon,  when the last Vacation Bible School was held at the Beulah Baptist Church in Proctorville (Lawrence Association).  A lot has happened in those 43 years, there were many struggles and many times when a faithful few would gather for worship, but they continued to pray and persevere.  In the past two years a transformation has occurred.  Guests started coming to Beulah and they stayed.  Dr. Kevin Bloomfield, who was supply preaching for a couple of years was called as pastor and he and others will say that it is all in God's timing - the church was ready for transformation.  People continue to come and they are working, praying and studying together and reaching out into the community.  God is at work at Beulah Baptist!