Deprecated: Array and string offset access syntax with curly braces is deprecated in /home/dondaroc/public_html/abc-ohio.org/libraries/f0f/less/less.php on line 1067

Deprecated: Methods with the same name as their class will not be constructors in a future version of PHP; Wright has a deprecated constructor in /home/dondaroc/public_html/abc-ohio.org/templates/js_wylia/wright/wright.php on line 32

Deprecated: Methods with the same name as their class will not be constructors in a future version of PHP; Browser has a deprecated constructor in /home/dondaroc/public_html/abc-ohio.org/templates/js_wylia/wright/includes/browser.php on line 135
 ABC-Ohio Region News

Rev. Ralph H. Dovenbarger, 84 of Canton, died at 8:59pm Saturday March 31st at Canton Christian Home, Canton, OH. He was born Saturday, May 28, 1927 in Zanesville, the son of Ralph E. Dovenbarger and Mildred (Fritz) Dovenbarger.  Rev. Dovenbarger was a graduate of Ashland College and received his Masters Degree from the Southern Baptist Theological Seminary. He faithfully served the congregations of Ark Springs Baptist Church, Newcomerstown Baptist Church and the Headlands Baptist Church of Mentor as their pastor. He also volunteered as a pastor at First Baptist Church in Englewood, FL. He loved music and enjoyed playing the trumpet. Rev. Dovenbarger spent many years with Christian camps where he directed camps and canoe trips. Ralph was instrumental in the early years of Camp Koinonia.  Rev. Dovenbarger is survived by wife: Dora Jane Dovenbarger.  He was greatly loved and will be greatly missed.

Omega Baptist Church of Dayton recently celebrated the ordination of Rev. Meshach Kanyion.   Meshach Kanyion was born April 7, 1983 in Nigeria to Timothy and Angela Kanyion.  He is married to the beautiful Ashanti Kanyion.  Meshach & Ashanti have two little girls; Charlee and Sameera, and a strapping young lad named Elias.  Rev. Meshach currently holds a (BA) Bachelors of Arts degree in Consumer Economics from the Ohio State University, and a (M. Div.) Masters of Divinity from the United Theological Seminary.  He has served in various ministry contexts, including Associate Minister and Youth Pastor at the Omega Baptist Church.  Rev. Dr. Daryl and Rev. Vanessa Ward are co-pastors of the Omega Baptist Church of Dayton.  Reverend Meshach is currently serving as Senior Pastor at Gethsemane United Methodist Church in Columbus, Ohio.  We congratulate Reverend Meshach and the Omega Baptist Church in this ordination and look forward to his future ministry in the American Baptist Churches.

It is with deep sadness that we were informed of the passing of Rev. Larry Sprankle  on Friday, February 3, 2012.  Larry served as Associate Pastor of Kenwood Baptist Church from 1982 to 1985.  Larry and Dorothy have continued as active members of the congregation and the Homebuilders Sunday school class. Larry, age 97, passed away with his beloved wife and family at his side. Dorothy and Larry were married for 74 years. 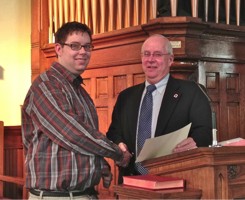 On January 15 the First Baptist Church of Delaware presented a license to preach to Sam Chesser.  Sam is a second-year Master of Divinity student at the Methodist Theological School in Ohio.  In addition to a scholarship from the seminary, Sam has been awarded scholarships from the Marion Baptist Association and the Ohio Baptist Education Society.  He is an effective preacher who is often a guest in Marion Association churches and others in ABC/Ohio.  Sam is pictured here receiving the license from Rev. Tim Chesser, his father, who is pastor of the First Baptist Church.

Former ABC Ohio Pastor Goes to Be With The Lord 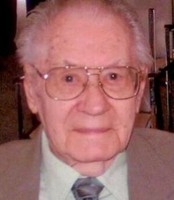 Rev. Richard "Dick "Harold DeMott, age 95, died at Hoosier Village in Indianapolis, Indiana August 28, 2011 at 9:30 a.m. Dick was born January 15, 1916. Dick was an ordained pastor of the American Baptist Churches, USA. He served in many churches throughout the Midwest. Dick was a veteran of WWII where he served in the Navy's Atlantic Fleet. He was stationed in North Africa as an aviation mechanic. Dick attended Moody bible Institute in 1946 and graduated from Northern Baptist Theological Seminary five years later.  Dick pastored several American Baptist churches in Ohio, including Pomeroy, Jefferson, Greenfield, and Martins Ferry. After retiring in 1981, he served as an interim for ABC churches in Ohio, New York, Pennsylvania, and Illinois. With his wife Ruth he moved to Hoosier Village in 1998.  Dick thoroughly enjoyed gardening, finding peace and joy doting over both vegetables and flowers. His love for nature made him a bird watcher and, in his younger years, an avid family camper. He was rarely found without a book in his hand and believed books to be his "friends". He enjoyed classical music as well as the annual Army-Navy Football game. Dick will be remembered for his humble Christian faith, his dedication to the Bible, his commitment to God's call into Christian ministry, and his hope in eternal life.