Deprecated: Array and string offset access syntax with curly braces is deprecated in /home/dondaroc/public_html/abc-ohio.org/libraries/f0f/less/less.php on line 1067

Deprecated: Methods with the same name as their class will not be constructors in a future version of PHP; Wright has a deprecated constructor in /home/dondaroc/public_html/abc-ohio.org/templates/js_wylia/wright/wright.php on line 32

Deprecated: Methods with the same name as their class will not be constructors in a future version of PHP; Browser has a deprecated constructor in /home/dondaroc/public_html/abc-ohio.org/templates/js_wylia/wright/includes/browser.php on line 135
 Something About Our Keynote Speaker: Rev. Dr. Carolyn L Gordon

Something About Our Keynote Speaker: Rev. Dr. Carolyn L Gordon 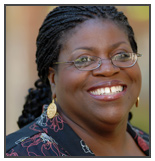 ABC-Ohio was blessed to welcome Rev. Dr. Carolyn L. Gordon as our keynote speaker for the 2010 Annual Gathering in Columbus.  She joined the Fuller faculty in 2007 as associate professor of communication and chairs the Department of Preaching and Communication.  She came to Fuller from Central Baptist Theological Seminary, where she served for five years as associate professor of church and community; she has also taught communication and public speaking in a variety of contexts.

Dually ordained by both the Southern and National Baptist conventions, Gordon has more than a decade of pastoral experience during which she preached regularly.  She directed the Ministries in Higher Education department of the Washington DC Baptist convention for six years, and has experience as a television producer and host as well.

Gordon is a regular lecturer at church-related conventions and conferences, and has served on the executive boards of the Center for Urban Church Renewal, United Inner City Services, and Baptist Women in Ministry.  She has received numerous honors and awards, including Outstanding Black Alumni (Southern Baptist Theological Seminary, 2004), Outstanding Baptist Chaplain Recognition (1997, 1998), Most Supportive Faculty (Black Image Award, 1992), Woman of Color of the Year (1990), and Outstanding Youth Woman of America (1983-1988).  Her current research interests include communication theology: what God intended for the spoken word, preaching to senior adults, preaching to those with disabilities and vocal development and the maintenance of the preaching voice.